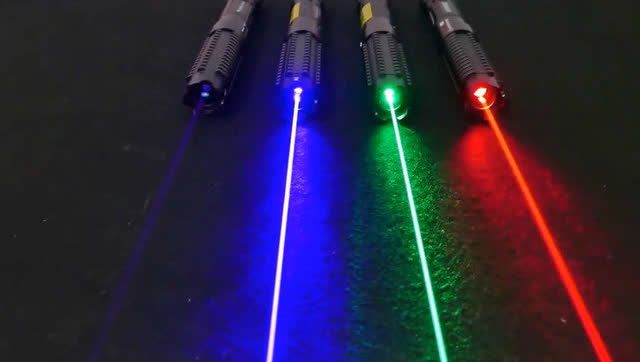 The laser pen can easily illuminate the wall and ceiling, leaving a bright “small spot”. But how far can it shine? Can you shine on the moon? Can we “illuminate” the moon with a laser? Let’s explore it together today.

How far can the laser pointer shine?

When you use a laser pointer, you must have such experience: the farther the object is irradiated, the larger the spot area and the darker the color.

It is not difficult to find that although the laser is a highly collimated light, it will gradually diverge as the propagation distance increases and the air is scattered, and the brightness will gradually decrease.

Let’s take the commonly used pen-shaped laser pointer as an example. Its power is about 5 milliwatts (0.005 watts). At a distance of 100 meters from it, the laser light source looks like a 100-watt bulb at 0.91 meters away, which is very dazzling.

Stay farther away and observe the light it emits on an airplane flying at an altitude of about 12,000 meters (assuming there is no interference from clouds and fog), the laser pointer will be as bright as the moon.

Observing from farther places, such as the International Space Station, the brightness of the laser pointer will drop to about the brightest star in the night sky.

Therefore, although the laser pointer can irradiate to infinity in theory, the actual propagation distance visible to the naked eye is probably only a few hundred kilometers at most.

Can a laser pointer illuminate the moon?

The average height of the International Space Station from the ground is 345 kilometers, and the moon is about 380,000 kilometers from the earth.

If an ordinary laser pointer is used to illuminate the moon and remove the barriers of the atmosphere, the emitted light can still reach the surface of the moon, but the light will be scattered on a huge area, forming a huge and dim “spot” that cannot be recognized by the human eye.

To illuminate the moon, our opponent is the sun-a huge thermonuclear fusion reactor. The sun converts 40 billion tons of matter into energy every second, which is equivalent to the simultaneous explosion of one quadrillion hydrogen bombs.

Although the moon is extremely far away from the sun (about 400 times the distance between the earth and the moon), the radiant power of the sun to the moon far exceeds that of the laser pointer in our hands.

According to calculations, even if everyone in the world is shining at the moon with a laser pointer at the same time, the brightness of the spot is still less than one billionth of the moonlight itself.

It seems that the laser pointer alone cannot illuminate the moon. Fortunately, we have many laser transmitters that are much more powerful than laser pointers.

How to illuminate the moon with a laser?

For safety reasons, the power of civilian lasers is often very low (generally no more than 1 watt), while the power of military laser weapons is much higher.

As early as the 1960s, people had developed laser-guided missiles. With the development of laser technology, laser has gradually changed from a “navigator” to a weapon itself.

Nowadays, laser weapons are widely concerned for their flexibility, portability, safety, efficiency, and low cost. They are considered to be one of the key technologies on the battlefield in the future.

The U.S. Air Force once successfully shot down two test missiles with a 747 jumbo jet equipped with a “megawatt-class” chemical iodine-oxygen laser YAL-1. The average power of YAL-1 is more than 100kW, and it can only be launched for 3-5 seconds each time, which is enough to cause damage to any target within 100 kilometers.

If you don’t count the cost, using 5 billion YAL-1s to illuminate the moon at the same time, we can make the moon reach its usual brightness in a few seconds and illuminate the waning moon into a full moon.

It is a pity that YAL-1 emits infrared lasers, which cannot be seen by human eyes. To appreciate the artificial “full moon”, you must wear infrared observation equipment.

We might as well be bolder. At present, the world’s most powerful laser device is the Rapid Ignition Test Platform (LFEX) located in Osaka, Japan. The power of the ultraviolet laser emitted by it reaches one petawatt, which is a thousand times the global power generation capacity. This kind of device is usually used for experiments in fields such as nuclear fusion. If there is a visible laser of the same power, only one is needed, and we can shine the moon as bright as usual.

It is a pity that the LFEX laser can only emit 1 picosecond (one trillionth of a second) at a time. Even if we can see ultraviolet light, it is too late to capture the moment when the moon is illuminated.

If we again, regardless of the cost, let everyone in the world have an LFEX super laser and shine on the moon at the same time, what will happen?

This beam of light heats the atmosphere into plasma before leaving the earth, and then the surface begins to burn.

After irradiating the moon, the moon will be thousands of times brighter than usual, and the rocks on the moon’s surface will be heated to an incandescent state within 2 minutes.

Fortunately, our technology cannot provide such a huge amount of energy, and such experiments can only stay in imagination. In general, illuminating the moon with lasers is still an unfulfillable wish.

It is worth noting that although high-energy lasers have huge energy, they have strict usage specifications and professional operators, and are usually safer; on the contrary, lasers used daily are prone to danger.